The youngest of 11 kids, Ellery and his siblings grew up in the South Norfolk church their father pastored. The musically gifted family sang together. “We traveled the world together—we were pretty good,” he says, right up to the time they finished their first 90-day singing tour.

He completed his Army basic training at Fort Bragg, then moved on to Fort Jackson for Advanced Infantry Training. “The next thing I knew, I was over in Vietnam.” His assignment was as an infantryman / heavy equipment welder, “but I did a lot more shooting than welding.” Base camp for Ellery’s combat unit, Eleven Bravo One, was in a Viet Cong hotbed where American and South Vietnamese forces were often heavily outnumbered. The fighting was fierce. “I turned 20 in a foxhole under fire. I turned 21 in a rice paddy under fire. None of it was fun.”

Amazingly, Ellery’s worst war injury was a serious wound to his hand. The hospitalization was his first. It would not be his last.

After returning from the war, Ellery worked as a welder at Norfolk Shipbuilding and Drydock. Then, sensing a call to ministry, he moved to Greensboro, N.C., to start a church, Eternal Truth Ministries. He served in the pastorate for nearly 20 years. He also married in his 30s and he and his wife raised three daughters and a son.

Though Ellery had left Vietnam in mid-May 1970, Vietnam never fully left him. Over the years, he found it “hard to talk about the war with anyone who hadn’t lived it,” and he suffered from PTSD. “I really was trying to forget. You name it, we dealt with it.” One night, he recalls, “I almost killed my wife.” He dreamed that pit vipers filled the bed and he was trying to kill the snakes. “I punched her one time in the face. I felt so bad. I was having a nightmare.”

Years after moving back to Norfolk, in his 60s, Ellery was badly injured in a forklift accident at the manufacturing plant where he worked. With two rods and seven screws holding his right leg together, he could no longer do his job. “I was working, was doing well, then all of a sudden this injury hits like a ton of bricks. You see people doing what you used to be able to do. But I couldn’t do much of anything for myself. I had to have help even getting up. It all made me angry.”

But worse was yet to come.

In 2016, Ellery ended up back in the hospital. He’d felt sick for months and sometimes he fell down. His voice faltered. And he rapidly lost weight. At 6’3”, Ellery usually weighed about 247 pounds. At his granddaughter’s ministry ordination, he was down to 154. “I used to fill that robe out, but I looked terrible, tired. The Devil was fighting me hard. He was trying to take me out.”

After a battery of tests, six doctors gathered his entire family around his bed to deliver the diagnosis. Ellery had stage-four kidney cancer. The mass on his right kidney was as large as the organ itself, and the disease had metastasized to his prostate, chest, and lungs. When the physicians suggested hospice care so he could die in peace, Ellery ordered most of them out of the room. The prognosis looked grim, but “I made my mind up I wasn’t going to die.”

Ellery kept his Sentara oncologist, Dr. Mark Fleming because “he saw my future, too. He’s a good Christian man.” He says his urologist, Dr. Michael Williams, also has been a Godsend.

They all suspect that heavy chemical exposure during his tour of duty in Vietnam contributed to his poor health. “Agent Orange was used against us and we used it, too,” Ellery says. “And the CS gas was really bad! Just one deep breath and you’d be dead.”

Too frail to survive surgery, Ellery immediately started treatment at Sentara’s Brock Cancer Center. The radiology was bad, but the chemotherapy was hardest. “I can’t tell you…what it does to you!” It gave him jaundice. “My eyes turned yellow. My teeth were yellow. My fingernails turned yellow,” but his Sentara physicians helped him overcome the symptoms. “I did look like I was dying…but I’m not going to be in a casket until God puts me in there.”

But Ellery admits that his faith wasn’t always so strong. “Cancer changed everything. And I did something stupid when I got sick. I got disappointed and angry with God and I lost my faith. I should never have started. I know that. I used to tell people, ‘Without faith it is impossible to please God,’ but it took me a long time to get my faith back.”

Eventually Ellery told God, “I’m putting all my trust in You. I’m not going to allow the enemy to trick me. I’m going to ‘Stand still and see the salvation of the Lord.’” In his spirit he felt a sense of peace.

But, he says, the burden of caregiving for him for so long was “just too much” on his wife and his marriage. When they separated in June 2021, Ellery came to The Union Mission. Ellery had never been homeless before, but he says this has been “the best place for me.”

“I find myself not willing to let stuff take me down to the point where I want to give up. Cancer was that—I felt like giving up—but God…! I didn’t do it by myself. And it makes me happy how God helped me, old hard-headed me, disobedient me, to come back. I’m moving from death to life!”

And his faith has grown here, too. His case manager, Rev. Raymond Evans, “who stuck to me like glue,” urged Ellery, now 75, “not to be quiet now!” He told Ellery, “It’s easy for you as a former pastor. Stir up the gifts in you and preach the Word!” 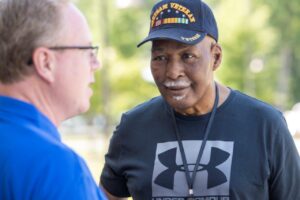 “Moses’ ministry didn’t start until he was 80, and God kept him in the wilderness for 40 years of that!” Ellery is hoping that the Lord will “reenergize me…give me another chance to teach some of these young people about Him. I can tell them something because I’ve been through something. I am still going through stuff, but by the grace of God, I’m holding on. His hand is always at my back. When I feel like I’m going to fall backwards, I can always feel His hand.”

Though Ellery qualified for Veterans Administration housing programs, the waitlist was long, and the Mission’s Tenant-Based Rental Assistance Program proved to be a better pathway for him. With income from Social Security and his military pension, Ellery recently moved into his own apartment in Norfolk. “God made a way out of no way!” In addition, the Lord arranged another blessing. Ellery discovered that his neighbor a floor down is a Vietnam veteran as well—and as it turns out, they both served in the same unit in Vietnam, but never knew each other. They check in on each other and Ellery is delighted to have “an Army brother.”

Now he’s focused on improving his health and his testimony. He’s hoping to continue to grow in the Lord and to make amends with a few people he knows that he disappointed or hurt over the years. Having cancer, he says, has humbled him. It’s helped him see the past afresh.

“If I had it all to do again, I wouldn’t change much,” Ellery says, “except maybe my time in Vietnam. That was hell.” Though the fog of war has cleared, the cancer still fogs his mind a bit, but to Ellery, one thing is certain. “I may forget things, but I’m never gonna forget the Word. That’s the one thing I’m never gonna forget ever! I grew up in the Word. The Devil can come fight me as much as he wants to, but God isn’t gonna let him take His Word from me!”

“God has kept me through thick and thin!”