Just one misstep can seemingly ruin your entire life, John can tell you. Even so, God can still put you on the path to brighter future.

John, his brother, and his three sisters grew up in downtown Washington, D.C., where their parents taught them to do well in school, to work hard, to save money, to show respect, and to stay out of trouble. Church, which John loved, was a part of their everyday lives. “I have a godly family, and my mama didn’t play,” he says, and “I’m glad I was raised that way.” After graduating from high school, he attended college for art and design, which he found helpful in his work as a landscaper. He made sure his home was always the most attractive house on the block. He loved working outdoors, making things beautiful, but also helped with customer service at his family’s funeral home.

That’s not to say that John avoided all youthful indiscretions, including an unfortunate marriage to an unfaithful woman. But his most life-altering mistake was in trusting a “friend” who wasn’t at all trustworthy. “I thought he was good people.”

John soon discovered otherwise. They had come to Virginia to work on a construction job. One day when John went to climb down from the roof, “some idiot had moved my ladder.” He grabbed the gutter and held on as best he could, but he fell hard and seriously injured his back. And his so-called friend disappeared, stranding John in Norfolk. 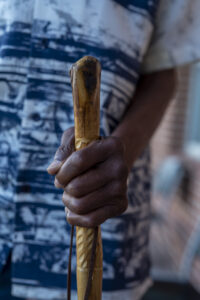 John had to have back surgery, and it went well, but he still relies on a cane to steady himself. “Though it looks like I’m drunk, it’s a blessing that I can walk anything like I’m supposed to.” Plus, the accident affected his ability to keep a job as steadily as he always had. It also meant that sometimes he made desperate decisions. John sometimes lived with unreliable people—and even though he was working and paying his part of the rent, evictions would leave him homeless again.

Homelessness took a toll on some of John’s choices and on his health. In 2021, he’d been living in someone’s garage, with only a space heater to stave off the winter cold and no air conditioning to cool the sweltering summer heat. The pandemic made even odd jobs hard to find, and John wasn’t eating regularly or especially well. A fall in the garage led to another hospitalization.

When he was admitted to Sentara Norfolk General Hospital for care, 6’ 2”-tall John weighed only 123 pounds. “If I could show you a picture, it would bring tears to your eyes. You could see the bones in my face and my body.” He was severely malnourished, and as the hospital worked to help him gain some weight, they told him they never saw a man so small put down so much food. “I was eating like there was no tomorrow.”

After stabilizing in the hospital for three days, John was discharged to The Union Mission. He’d stayed here before and was grateful to be able to return as an emergency shelter guest. And though he cut his forehead when he took another fall shortly after he arrived, John is steadily regaining his health. Our Wellness Team made sure his wound healed properly and that he got bus passes for his medical appointments. They supplied him with medications, vitamin supplements, and daily protein shakes to help him gain back some weight. “They did a great job! I got everything that I needed!” John is doing his part, too. An amateur cook himself, he likes the food here at the ministry, and “I usually eat like it’s my last meal.” So far he’s gained nearly 20 pounds, and already he’s feeling so much healthier. “I give thanks to the Good Man upstairs. He brought me through a whole lot.”

Once John began collecting his Social Security retirement and SNAP benefits, he joined RECLAIM, our transitional housing program for men who need more time and resources to prepare for independent living. He loves having a rental room within the positive community of men on the shelter’s third floor. John likes looking sharp, even on a thrift store budget, and he also appreciates having a microwave and a mini-refrigerator since he’s become a regular at the Royal Farms deli counter, where he orders five or six different subs a week.

John has always enjoyed The Union Mission’s spiritual emphasis and Bible studies. And “I love going to the Chapel,” where he sits in the front row, praying, singing bass during the hymns, and taking notes about verses he wants to read later.

He’s just as thankful for the practical help he’s found here. “I’m a go-getter. I take advantage of everything the Mission has to offer!” John has taken free courses in anger management, healthy eating, medication management, and heart- and budget-friendly cooking. He’s participated in art therapy and mental health support sessions. “I have three or four certificates on my wall and I look at them every day, faithfully.” The classes “have been amazing for me! They keep my mind focused on positive things.”

“Some of the guys here at the Mission just sit around and don’t care about nothing.” He understands that depressed feeling. “At one time, I didn’t see nothing in front of me. I didn’t even give a hoot. But the Mission got me back on track.” John likes to encourage the newcomers, especially the young men, to get involved in improving their own lives. “This is a safe haven. You don’t have to worry about who’s going to come hurt you. You can wake up in the morning with no worries in your head. There’s so much good in here! If you want it, don’t hesitate! Get it! Just do what you’re supposed to do. You aren’t missing nothing out there in the streets—nothing but trouble!”

“I have no shame in telling anyone, ‘I am at The Union Mission Men’s Shelter getting my life back together.’ I love it here. It’s been a pleasure.”

But John is also ready to start the next chapter of his life. He has been saving money and looking for an affordable senior living apartment in Norfolk so he can break out the new cookware set he’s saved and make some of “my chicken.” He’d also love to get back to his drawing, grow some vegetables, and maybe go swimming. He hopes to attend a local church, which he’s missed. And he’d love to do some part-time work. “Landscaping—that’s my heart, my passion!” John says, but he also wouldn’t mind modeling again. “If I could get back into doing that, I’d jump to it.”

But in everything he’s relying on God’s timing. “If you won’t be patient, you will mess up your own life. I’m done making mistakes. I’m leaving that ugliness behind me.”

And he’s grateful for all the help from the ministry and its supporters. “I would tell everyone who donates to The Union Mission that I appreciate it…very deeply. If it wasn’t for The Union Mission, who knows where I and the other fellows here would be? I love them so from the bottom of my heart!”