Few people expect to meet a hero living at a homeless shelter. But they should meet Kody.

He’s is a security guard at downtown Norfolk’s premiere shopping center. He’s worked there for nine months now, “seeing that everyone is safe inside the mall” and “making sure things don’t happen.”

But one busy day last summer, something did. Kody, 24, noticed a barefoot man walking around the mall, “acting crazy and whatnot—completely out of it.” As Kody went to tell him that the mall required shoes, he noticed a knife, but “I did not know he had a gun on him, otherwise I would not have approached him.” While Kody was asking him to leave, the man turned and swung. He struck Kody in the face and split his lip, but “I was able to grab hold of him and keep him there until the police officers arrived.” The Security Team later heard that the man was convicted of killing his grandfather that morning before coming to the mall, but is awaiting a sanity hearing before sentencing.

“The crazy part about it is that nothing like this normally happens at the mall.” His supervisors were elated with his bravery, and awarded him a special plaque. He’s proud to have been recognized for his public service, and though he isn’t sure, Kody believes he was there for a purpose. “This is the first time I’ve done something dangerous,” he says.

But really it isn’t. In his previous job as a dispatch security guard at a retirement home, an elderly woman’s apartment caught fire. Kody ran into her room and carried her to safety. He was treated for smoke inhalation and burns on his arms, “but I got her out of there.”

“I guess security has always been my kind of work.” He credits his dad with teaching him to protect people without thinking about the repercussions. “It’s kinda why I’m in the kind of job I do.”

He’d love to become a sheriff’s officer. “Besides just helping people, they make good money.” But for now he’s happy in his work at the mall and has been made a dispatcher for the security office. “I mostly work nights, so I’m out on the floor, too, doing all the things that need to be done. The mall needs security no matter what.”

Security isn’t something Kody had a lot of when he was growing up in Virginia Beach. “I didn’t have the best childhood, I guess.” His parents divorced when he was a preschooler, and he lived with each of them during his school years. He knows they did the best they could, but “to be honest, I got in trouble a lot. I got kicked out of school.” He wonders aloud if he was just a “bad kid,” but he never used drugs and he never drank. “I just didn’t like how I was living. I think part of me was purposely bad to be able to go somewhere else. Even if it wasn’t a place I wanted to be, I would rather be there than in my household.” Kody spent some time in residential counseling and treatment and it “kinda helped” him, but afterward he returned to the chaos at home.

Looking back now, he understands better. His attention deficit disorder was undiagnosed and contributed to his anxiety and anger management challenges, which he now has under better control. But the main cause of his instability was his home life. “I never really had the best relationship with my father,” so he decided to leave his home at 17. He lived in an apartment with his mother, with whom he has always been close, and graduated from high school.

“I take care of my mother the best that I can, and she was going through some stuff.” But in 2019, Kody didn’t know that his mom was unable to pay the rent until they were evicted. She went to a Christian shelter in Virginia Beach. He came to The Union Mission.

He had never been homeless before. The Mission was the first shelter he’d ever tried, and his anxiety level was high.

Kody told his case manager, Lamont Harris, that he just wanted to find work, save money, and get his own place. He wasn’t as interested in some of the other resources that the Mission had to offer. Though Harris worked with him one-on-one on some of his longstanding issues, Kody found a job in security and stayed at the Mission only for six months, even though he didn’t really feel like his life was fully back on track. “I was just kinda rushing to get out, I guess.”

After he left, he rented out a room, but the homeowner ended up selling the house. He found another room to rent, but “I was barely making it by.”

By early July 2021, Kody found himself homeless again. Laid off from his job during COVID, he couldn’t keep up with his rent and had no other options. He knew he’d feel safe returning to the Mission, so he called his former case manager to see if it was possible.

“This time, it was a different Kody. He had matured a lot and some of things that he was dealing with back then he had under much better control now,” Harris says. “It’s like night and day. He’s doing very well now. I’m very proud of him.”

“Kody always knows what he wants to do. He even did last time. Now it’s more about slowing it down so he doesn’t miss a step by going out too fast,” Harris says. Kody invested more in the offerings of our David Development Program for our younger men’s shelter guests. “I want life to be better,” Kody says. “There have been times when I lost faith, when I was at my lowest, but still now, I’m always trying not to give up.” 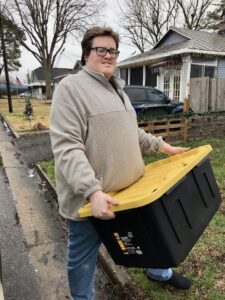 He was one of the first shelter guests to be considered for housing through Norfolk’s HUD-subsidized Tenant-Based Rental Assistance program. The interview was important, so Harris accompanied him for support, and as “John G,” the TBRA program manager went over everything, Kody paid close attention. “One thing about Kody is that he asked all the right questions in the interview,” Harris says. He asked about utilities, proximity to bus routes so he can get to work, even whether he could have a dog. With a few verifications and signatures on paperwork, Kody was approved.

Then it became “just a matter of finding a place” and waiting for an opening, which can take several months. But while Kody was renting a single room on the Mission’s third floor, he found a TBRA-approved apartment that suits his needs. In just a few weeks he was all moved in, and had a good start on setting up his new home thanks to a free Housewarming Hope Tote that Mission volunteers had packed full of helpful bath, kitchen, and laundry supplies.

“I try not to think about the past,” Kody says. “I think about the future,” He’d love to find the money to go to college at ITT or ECPI to study software development. “My life is pretty much work, sleep, and playing video games,” and working with computers would be a good-paying career.

Kody is grateful for all the help he’s received here at the Mission. “This time I was able to get a good job with the security company I’m with now, and I got into a program that helped me get an apartment and pays for a good percentage of it. I’ve never actually had my own place, so this will be a first,” he says with some pride.

He is glad to have found an ongoing mentor in Mr. Harris. “He’s done a lot for me. He’s more of a father figure to me than my dad ever was. He’s helped me throughout the problems I’ve had. I don’t think I could have made all this possible without him.”

Kody’s future is more secure because of his time here. “The Mission has great people who do so much and make it all come together for everyone. It’s definitely helping me!”