At 13, Kadeem had no idea what post-traumatic stress disorder was.

Now 19, he understands PTSD all too well.

Born in New York, Kadeem lived most of his life on the Caribbean island of Grenada with his mother after his parents divorced. He was their only child, “and she did everything for me,” he says.

But as he got older, Kadeem wanted more and more to get to know his father. He had seen pictures of his dad, but “I never really saw him.” Kadeem felt fatherless, and “for months [my mom] heard me asking if I could.” His mother was resistant, and Kadeem began acting up. “I skipped school for weeks and weeks, and finally she was like, ‘Ok, you want to go that bad…?’” and arranged for the young teen to live with his father in the United States.

When Kadeem moved to Virginia, “my dad was a cool person,” though for the first two years his father served in the Army. Kadeem is unclear on many of the details, but he knows that sometime during those two years his dad served in a foreign combat zone. He’s not sure where—maybe Afghanistan—but he knows it was intense. He didn’t really understand why his father was so different when he returned from serving, but his mother says that “fighting in the war” changed him.

It also changed Kadeem’s everyday life. “My dad was just angry all the time and I never knew why,” he says.

“I can’t say it’s all his fault.” Kadeem admits that he was far from the perfect teenager. He’d talk back, he had some questionable friends, and he didn’t always do his household chores like washing the dishes.

And for a while, Kadeem shirked his responsibility to do well in school. “I was fooling off. I wasn’t getting good grades—I had mostly Cs and Ds” He says his Portsmouth high school “passed me along,” but by his freshman year, he realized that he needed a good education and he started working harder. Over the next few years, his grades improved and “by senior year, I was getting straight As.” Though other family members praised his accomplishments and his graduation, Kadeem never felt that his father was proud of him.

He also found success in part-time jobs and computer gaming tournaments. Still, nothing seemed good enough, and Kadeem says his father’s negativity made him sullen himself. Kadeem distanced himself from family, and took solace in his room. Sometimes he was locked out of the house for a few hours, which grew to a few days as tensions escalated. Police sometimes had to let Kadeem back in, and the anxiety was palpable.

Eventually, Kadeem’s father insisted that he enlist in the military. Kadeem completed Marine boot camp training, but when they discharged Kadeem for having signed up under duress, his father demanded that he leave the house before they killed each other. His dad handed over all his son’s stuff and told him not to come back.

For a while Kadeem was able to stay with different friends for a few days at a time. One mom even let him sleep in the back of her car during the day. “When I became homeless, I found a lot of people I thought were friends really were not.”

“I slept at the park for about three weeks. My mom was upset about that, but I told her I didn’t feel safe to try to go home. Thank God it didn’t rain!”

“When I added it up I had maybe 16 out of 60 days that I had somewhere good to sleep and try to get myself together.” Kadeem went and applied for Food Stamps and got his Medicaid card, but he was still homeless and losing hope.

Then he remembered that his mom had told him that Christian church people would always help him. “Back in Grenada, I used to go to church every Sunday with my mom. Our whole family went from before I was born.”

Kadeem still believed in God, and one weekend he sat outside a Portsmouth church and listened to the service. Afterward, he asked if he could speak to the pastor. “I needed to talk to somebody,” and as Kadeem explained what he was going through, the pastor prayed for him, got him some clean clothes, and offered to hold on to his belongings so he didn’t have to carry them with him everywhere.

The pastor also told Kadeem about The Union Mission. “He brought me here at the end of August 2020.”

Just 18, Kadeem was the Bashford Men’s Shelter’s youngest guest. It was much better than sleeping outside, he says. “I had a roof over my head. I had plenty to eat—and they make really good food. God at least gave me that, but I’m always looking for more. I’m greedy.”

Here at the Mission, he found so much more. “After I came here it was more calm. I could keep my head straight. They helped me with stuff I didn’t even know they could help with.”

That included his mental health. “Most of it was an upstairs problem, you know, the way I think. They said I’m not negative, but I am depressed. And I have PTSD, too.” The Wellness Team helped Kadeem get medications and vitamins to help with his mental health. He also participated in the Good Enuf sessions with Christian rapper Legin, which encouraged Christian counseling, and attended a men’s support group twice a week with other traumatized men. Both gave Kadeem tools to help him see things differently and to experience God’s acceptance instead of anger and constant frustration.

The shelter rules and schedule helped Kadeem build self-discipline. “A couple of times I coulda been kicked out. I’m young and sometimes stupid,” but he’s grateful for the grace that kept him in the shelter. At 19, “I have a little child inside me still, but I have that mature side that knows how to control myself. I fell a lot of times—I still fall and fail—but I get it right. I learn from it.”

Kadeem thought hard about how to put himself in a better situation, and as he and his case manager planned his future, they secured veterans’ support for his housing and collaborated with his mother in Grenada to get Kadeem into Tidewater Community College with financial aid.

Kadeem’s faith in God and prayer also helped him refocus his thoughts. “The Mission has helped me a lot, [but] most of the reason that I’m in a better situation is because I asked Him just to help me. Now if I don’t know the answer, I ask God about it. I just pray and leave it alone for Him to show me. Then I can go on with the rest of my day with a calm mind instead of stressed out.” 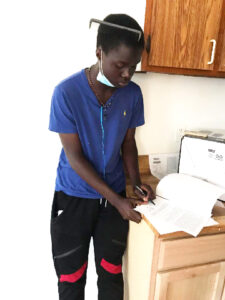 In May Kadeem signed his first lease. He’s working part-time and at TCC he’s studying IT and video graphic design to complement his interest in competitive gaming.

Many of Kadeem’s family and friends never knew that he was homeless. He says through this experience he lost a lot of former friends, “but I asked God to take people out of my life if they weren’t going to be helpful to me—and one by one by one they left.” He wants God to continue to guide his life, and he has decided to make more “good choices”: no gang friends, no weed, no cigarettes, more exercise, more education, more church, more healthy relationships.

That includes restoration with his father when the time is right. “I believe in the Bible, so I’ll be respectful—he’s my dad—I’ll let him talk first. Then I’ll talk.”

Kadeem wouldn’t have chosen to stay at the Mission, but he knows it was a helpful haven on his journey to a bright future. “I’m actually doing so much better than I was before. Now I know what I’m doing and how to keep myself afloat.” Thanks to his time here, “I believe that I really can be successful!”