Osteogenesis imperfecta. Shon has lived with it since 1973, in other words, his entire life.

“It’s a hereditary bone disease,” he says. “I got it from my mom. She got it from her dad. There’s a 50/50 chance that you could pass it on to your offspring—and I passed it on to one of my three sons.”

It’s better known as Brittle Bone Disease, Shon explains. It’s incredibly rare: it affects only 1 in about every 15,000 people worldwide. And, he says, “it’s incurable. It’s something I’ll need to deal with for the rest of my life. It affects my bones. It affects my joints. It affects my respiratory system. Because the bones are brittle, they could probably crush my lung. And now that I’m older, I’m in pain.”

If you’ve seen the 2000 movie “Unbreakable,” osteogenesis imperfecta is the condition that plagued the film’s villain, played by Samuel L. Jackson. “Mr. Glass stepped off the curb wrong and crushed his whole leg and ended up in a wheelchair,” Shon says. Though that’s the experience for many people with brittle bone disease—weak body structure, bent backs, broken bones after the slightest wrong move—Shon is grateful that his condition is not nearly so severe.

Growing up, Shon says he was an active child, “Because I had this bone disease, I knew I wasn’t supposed to be doing the things I was doing—flips and cartwheels, playing football and basketball…but I still did. I just wanted to do the regular things that the regular kids did, you know? But I knew that I could hurt myself easier than the regular kids.” Shon laughs when he remembers how his mom was “adamant” that he should be careful, but “she couldn’t really stop me,” he laughs. “Sometimes I came home with a broken bone—a lot of times I did.”

These days Shon, 47, wishes he’d listened more to his mother. “Over the years, I’ve broken every bone in my body except my neck and my back, by the grace of God,” he says. Though he spent a lot of time recuperating when he was younger, “it’s a lot of pain now that I’m older. I feel it!” He has steel reinforcements where some of the bones fractured: a shank in his ankle, plates in his jaw and his chin. “They don’t bother me much because the metal is there,” he says. “But the breaks that healed on their own…those hurt!”

Predictably, it’s affected Shon’s ability to work. When he was younger and stronger, he did “a lot of construction work, a lot of heavy labor, because I felt my body could handle it. I wasn’t feeling much pain. But now, I couldn’t do it.” A few years ago, he moved from unloading trucks at Walmart to jobs in the hospitality industry. He felt that dishwashing and prep work was less strenuous, and he liked working in a hotel kitchen.

Then the coronavirus pandemic hit, and his job disappeared, as did most other restaurant and kitchen jobs. Shon cashed in his PTO and applied for unemployment. He was able to continue to pay the rent on his room until August. Then he was on his own.

“For probably a month and a half I had nowhere to go,” he says. Shon spent some warm days living on the streets, but mostly stayed “couch to couch” with family members and friends. But “it’s very humbling” to have to tell so many people your situation,” he says. “I started feeling too dependent on other people.”

Since he grew up in Norfolk, Shon knew about The Union Mission. He knew a lot of guys who had stayed here before, but “kinda straight away I was like, ‘Maybe I don’t want to check myself into a homeless shelter.’”

“But then I would explain my story and these guys were telling me, ‘Shon, they are definitely going to help you!’”

Shon came to The Union Mission in early October 2020. “I know what it feels like to have my own, but [being homeless], I felt like my life was in a rut. I wanted to make it better. Coming here and seeing everything as far as The Union Mission services are concerned, that’s what brought me here,” Shon says. “I didn’t know all the ways they would help me,” he says.

Like so many of the Mission’s homeless guests, “for a long time I went without healthcare,” Shon says. He’d hoped to find a job with medical benefits, “but it never would happen.” His Medicaid coverage also had lapsed while he was homeless.

One of the first things Shon’s case manager did was to have him meet with the Mission’s Wellness Team. The Wellness Program, funded primarily by a grant from Sentara, helps the ministry coordinate healthcare for the shelter guests. “From the first conversation with the Wellness Team, their interest for me was really there,” Shon says. “They’ve shown and proved that since I’ve been here.”

As Shon explained his medical history, the Wellness Team personalized an action plan to address the effects of his disease. Up front, Wellness Team leader Theresa Tambussi was concerned about Shon’s size, since being underweight is often a side effect of osteogenesis imperfecta. Shon has always been thin, he says, but he doesn’t mind the extra Boost and Ensure supplements Wellness gives him to help him maintain his weight with some extra protein. “I see Wellness once or twice a week, and I don’t mind telling them exactly what’s going on with me. I really like that, personally, they want to know how I’m doing every day. They’ve really been on top of that.”

Wellness also set up appointments for him to see a family care physician at Eastern Virginia Medical School in Norfolk. He’s also scheduled with a geneticist at EVMS. Shon is delighted to finally meet with doctors he had no money or opportunity to see in his past. He now has about three appointments each month. The Wellness Team makes sure he has bus passes to get to his doctor visits or transportation to pick up his newly prescribed medications and vitamin supplements to strengthen his bones. “They’ve had my back 100%,” Shon says.

And Wellness appreciates him as much as he does them. “Shon realizes he is blessed to have a place like The Union Mission, where so much help is given in one place,” says the team’s Gayle Harper. “It is so refreshing to work with someone who is so genuinely thankful for whatever help he gets.”

Part of Shon’s case management has been to get his Medicaid reinstated after six months without it. As long as he is staying at the Mission, he now has a permanent address.

Though his disease has been a serious, lifelong debilitation, Shon never much considered it a disability. Neither did his family. “I don’t think my Mom was too knowledgeable to know that this was a situation where she could file for me or put me on disability. I don’t think that was a part of her thinking. She felt like I was an able child who just needed to be careful.”

Though his mother also has osteogenesis imperfecta, she worked most of her life, finally as a Sentara employee. She started in the kitchen, but had studied stenography and was promoted to work in medical records. But in her mid 50s, she took a tumble that wouldn’t have fazed most people. “That fall was not supposed to crush her knee, but because of the disease it did.” As his mother aged, her condition worsened, and she now is on SSDI disability. Shon wonders if her pattern will be his. Even with the disease, “I felt able,” but more and more, “now, my body just really feels it.” 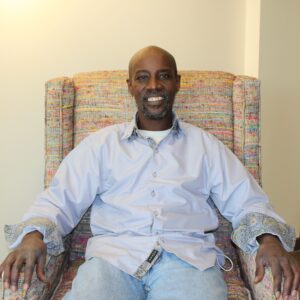 Here at the Mission, Shon has filed for SSDI Disability and he’s been told that, in light of his latest medical evaluations, he has a very good case. “They were very encouraging with that,” he says.

Another positive development is that Shon recently was able to move into his own place again, and he hopes one day he can find an apartment that can accommodate both him and his mother. She has been living in a nursing home, and the coronavirus crisis had taken its toll on both of their lives. Shon says he was unable to see his mom in person for months. “We’ve had Zoom calls, but….” Shon looks away. “This pandemic, it’s rough. It really did a number on me. I feel like otherwise I would have been able to survive.”

Shon was raised in the church, so he believes that his time at The Union Mission is part of God’s plan. “He has a plan for all of us. I’m still trying to figure out what it really is.” But he knows it’s been a benefit for him to be here.

Shon couldn’t imagine being homeless and trying to put his life, his health, his future back on track alone. “That’s the blessing that the Mission has been for me: the peace of mind to get my things together and to get myself together. A lot of people here, our situations would be bad if it wasn’t for the Mission. That’s my testimony! The Mission is the blessing now for me!”