“Life has been trying to make me feel old,” says Khalil, 27. “But I’m still young—and I’m determined to be better than I was yesterday.”

“My childhood was filled with ups and downs, but it just had more downs than ups.” Khalil grew up in Hampton Roads as a shy kid who loved music, skateboarding, and church, but life was unsteady at best. “My parents had me when they were in college,” and soon after that, his father was paralyzed with multiple sclerosis. His mother remarried and he gained a loving stepfamily until that fell apart in his teens.

Those years lacked supervision and stability. The divorce left Khalil alone in the house, often without any food. “It was just really a tough time for me…I didn’t have anybody.”

At 18, he got into trouble for breaking into a neighbor’s house and pawning what he stole. “Mainly it was for food, clothes, drinks, some teenager stuff. I was really just trying to survive.”

He was paroled for his first offense, but a few years later when Khalil missed a probation appointment, he ended up in jail for a few months. Though he spent his time reading the entire Bible, after his release, “I didn’t have anything or anywhere to go.”

In 2015, he’d stayed briefly at The Union Mission, but when the 2020 pandemic temporarily had closed the shelters to new guests, Khalil headed for the Virginia Beach Oceanfront. Some nights he slept on city benches. Working two jobs, he earned enough to rent a hotel room and eat every day.

By July, Khalil was able to move into the Bashford Men’s Shelter. “That day was really cool! I didn’t have to worry about the police, bugs, being dirty, how I was going to eat or wash clothes. I was able to get some sleep, and I found some people to talk to, to help me.”

Then he almost got kicked out. He didn’t know that smoking CBD would make him fail a drug screen. But the shelter superintendent said they’d take it a week at a time. “He didn’t give up on me. The Mission gave me another chance! Ever since then, life has had more ups than downs.”

One day Khalil’s case manager mentioned something new called The FatherHOOD Initiative. “She thought it would be good for me,” but he wasn’t so sure.

“It was awesome!” Khalil says. The Fall 2020 workshops focused on each participant’s relationship with Father God and presented biblical ways to work through doubt, disappointment, deficits, and a variety of life’s difficulties. “It turned out not to be what I expected, but just what I wanted—what I needed. It was one of those turning points in my life!”

“All the mentors gave us pointers we could use every day. They gave us a lot of insight on using the Bible when life is really difficult.” When “they talked about what they’ve gone through, that, for me, really stood out. I felt that!” Khalil filled his FatherHOOD folio with notes, quotes, and helpful handouts to reference whenever he’s feeling defeated or depressed.

In one early exercise, participants named the things that had plagued them, then chose a new name for themselves, based on one of their positive traits. Khalil became Consistency for the week.

“I’ve always been consistent with what I love to do: from making music or skateboarding or just trying to figure out who I am and who I want to be. I’ve been homeless for so long, living in and out of different homes, working different jobs, going through [so many] problems. But I kept going—I was consistent. I wanted to get off the streets. I wanted to work. I wanted to follow my dreams. I just stayed consistent.”

Having grown up without a father’s influence, Khalil reveled in finding mutual respect and in building relationships with reliable role models who have lived through many of the same life situations he has. “Not every day do you meet people who have answers for you, have faith in you, believe in you, love you…not for anything in return, just for you, because they want to see you succeed.”

During one session led by gospel rapper Legin, Consistency, sensing an opportunity to help others, put his reserve aside and volunteered to share two of his own original rap songs with the class. “I thought, ‘Hey, I’m not promised the next hour. Let me go ahead and do this’” When he finished, his classmates applauded enthusiastically, calling his music an encouragement. 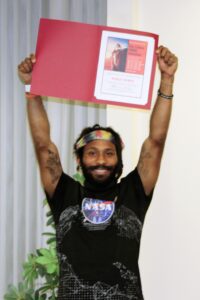 “That FatherHOOD program was a lifesaver!” he says. “We all needed and we wanted to learn some things that would help us get to the next chapter in our lives. We’re able to stand stronger now. We know how to venture through that problem. It’s so much easier now. It gave me those missing pieces in my life—it just gave me so much hope!”

Living at The Union Mission has helped Khalil put his future back on track. “This place definitely is a blessing!” He appreciates that “I always have somebody to talk to,” whether it’s a fellow guest or shelter manager. “You always have somebody to give you advice or help you out. I really love that this was one of those environments where I got to grow some more instead of being the ‘lone wolf’ out there running the streets all day and night.”

“I think honestly, if I wasn’t here in the shelter and I was still out there, I’d probably be dead, in jail, in prison, just trying to survive and still be this good person that I am.”

“The Mission gave me a better understanding as to what life is about.” The daily routines have helped him order his day, budget his money, and plan his life. And he’s taking the steps to achieve his dreams. While Khalil’s been here, he’s gotten his birth certificate and driver’s permit and his hearing aid has been repaired.

Now Khalil has moved into the permanent housing he lined up here at The Union Mission. He’s still steadily working in a cheesesteak restaurant, and once he gets his Social Security card and a car he hopes to earn a better-paying position at a local shipyard. “That chapter in my life for me is going to be about exploring more and growing up and being more of a man than I’ve ever been.”

“I’m really open to a lot of things. I also want to start my own business. These are just the stepping stones. By being consistent, I’m going to make it work this time.”

Khalil is amazed that even though he’s made so many bad decisions, he’s found so much good in his life. He’s grateful and wants to give back, to be a helping hand for others. “The Union Mission made a difference in my life. I know whatever I do in life, wherever I end up, I will always be able to share this with somebody. It’s going to save so many lives.”

“It’s been so heartwarming, the whole experience of being here,” Khalil says, tearing up a bit. “It’s like a journey to a place that you can only dream of, you can only imagine. If you actually find something similar to what you’re looking for, you just really cherish that place, that moment, all the people, all the things in that environment. This place will always be one of those good memories.”