“I never thought in my wildest dreams that I would be homeless,” Tim, 59, says. Raised by both parents with his sisters in rural Nathalie, Virginia, he’d grown up in church, graduated from high school, and been steadily employed in landscaping and at a manufacturing plant making whirlpools and bathtubs.

But in 1999, his father was hospitalized in critical care for a month after a heart attack, then was bedridden with kidney failure. Rather than put his parents in a nursing home, Tim quit his job, emptied his 401(k), and moved into their 1972 mobile home to serve as their caregiver. “It was four years with no income, but I wouldn’t trade that time for anything.”

After both parents died in 2003, Tim ran his own small lawncare business with two part-time employees. Many of his customers were retirees, some of them needy, and few paid in full or on time. Over the next 16 years Tim eked out a meager living, but money was always tight.

One Wednesday morning in 2019, Tim no longer wanted to live. “I got up on May 1 and I saw my financial situation and even though I knew the Lord, I just couldn’t face another day,” he says. As he planned to kill himself, the Lord spoke to his heart: “Timothy, you’re taking My work into your hands and you’re getting ready to step off into eternity, and there’s not but two places to go. Are you ready?” In the middle of his breakdown, Tim called the sheriff’s office for help.

“I ended up in Petersburg—in a ‘nut house,’ we used to call them,” Tim says. He was diagnosed with severe depression, which improved after a few weeks of medication and counseling. His hospital case manager recommended that he be discharged to The Union Mission. Tim was scared, but the Men’s Shelter manager reassured him that as long as he followed the rules, he could stay and work toward a better future. “I always took that to heart,” Tim says.

In his first few months here, Tim’s health problems caught up with him. He had pneumonia, then a heart attack that required a stent. The Mission’s Wellness Team helped him navigate his recuperation and his medications. 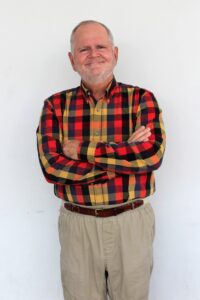 Tim also joined a six-month men’s discipleship program at the Mission. He loved the camaraderie and the immersive Bible study of Romans with the staff pastors and fellow shelter guests. “It’s enlightening, it’s encouraging, you know, being around a bunch of Christ-like guys. It’s really been a blessing!”

“But it’s not a cakewalk, I’ll tell you. Last summer I had no money, no benefits, and I couldn’t work. Oh my goodness, I had to trust the Lord! I admit it was hard to do sometimes, but He sure brought me through.”

One by one, Tim is meeting the goals he set. He’s been approved for SSDI disability and food assistance. Though he still relies on a walker because of sciatica and spine pain from years of heavy labor, he’s able to exercise at a nearby gym to regain his strength. He’s joined a local Baptist church with good preaching. Best of all, he’s moved into his own Union Mission rental room with a handicapped bathroom on the third floor of the Men’s Shelter—and he’s saving up money “so I can move into my own place and be independent again.”

“I know one day I know I’ll leave, but I just love it here!” Tim says. “It’s just a great place! The opportunity is here for anybody. You have to do what God is asking you to do, but if you are willing there are endless opportunities. I am eternally grateful for The Union Mission!”